The delicious savoury salted and subtly spiced meat snack, unique to South Africa is enjoyed as a snack almost everywhere in the world.  While America is known for its jerky, biltong is an exclusively South African product.  Originally meat was cut up into strips and salted for preservation before the advent of fridges and freezers, but today it is even more popular than ever.  Traditionally served on its own, cut up into bite-sized strips as a snack with drinks, lately foodies have started using biltong slices in all manners of creative and mouth-watering dishes.  But when it comes to adding some delicious protein to your well-dressed greens, nothing beats a good biltong salad.

While salads have traditionally been seen as the territory of skinny females keeping a strict eye on their figures, modern salads have thrown all these misconceptions out the window.  Bulked up with filling avocado or baby potatoes, the list of ingredients that work well with the savoury spicy meat is just endless.  Just about every South African chef or food celebrity has produced at least one version of a biltong salad, and across the country restaurants and bistros inevitably list a biltong salad option along with the traditional Caesar, chicken and Greek salad choices.  The popular African food restaurant Karibu, situated in the beautiful Victoria and Alfred Waterfront in Cape Town, is just one of the many restaurants that have made their biltong salad a truly unique South African experience – slivers of rare biltong and peppadews (South African marinated piquant peppers) served on crispy lettuce leaves, plum tomatoes, cucumber, onion, pumpkin seeds and peppers – topped with a home-made piquant dressing and putu (crumbly savoury corn meal porridge).

You can add sliced biltong to just about any salad instead of the traditional chicken or sliced cooked beef strips.  It can even add some protein to your everyday potato salad.  But there seems to be a definite move towards making a biltong salad as a dish in its own right, as a showcase for our favourite national snack.  Most recipes start with the greens – you can opt for tender butter lettuce or crisp cos, or the peppery flavour of watercress or rocket (arugula).   Avocado is a very popular addition; the soft and creamy avo provides a lovely contrast to the meat.  Some type of chees is also in order.  Those who find the flavours of blue-veined cheeses such as Stilton or Gorgonzola too overpowering can opt for the more subtle tones of Camembert or Brie.  In the Cape wine-land areas goats cheese is also highly favoured and it works beautifully with the warm spice of the biltong.  Top this off with some toasted walnuts or pecan nuts and your favourite dressing and you have a salad that you can certainly make a main meal of.

When one considers how important the role of food and its history is in the lives of people, it is not surprising to find that recipes have the power to give those who enjoy or create them a taste of home.  Food is a link to your childhood and your birth country, and many expats have found themselves overseas, surrounded by the exotic foods of their new adopted countries and trying to bring that taste of home into their lives.  An example of just such a chef is Jan Hendrik van der Westhuizen – who originally hails from Mpumalanga and runs a fabulous restaurant in Nice in the south of France.   One of the constant favourites on his menu is the Grilled Strawberry and Biltong salad.  Plum luscious strawberries are quickly grilled on a griddle pan, tossed with the greens of your choice and some slightly wet biltong.  Topped with a simple French Dijon mustard dressing, this salad is the perfect example of the harmonious marriage of Jan Hendrik’s local roots and his love of the French cuisine that he has so effortlessly mastered.  His cook book The French Affair contains many more such tempting recipes.

Closer to home we have the Namibian native Antoinette de Chavonnes Vrugt and her lover letter of a cookery book entitled My Hungry Heart – Notes from a Namibian Kitchen.  Namibia, South Africa’s close neighbour (in both geography and culture), shares many food histories and in this open love letter to her country of birth she memories of the food which played a part of her growing up which strikes a poignant note with both casual readers and foodies alike.  Antoinette’s Kalahari Biltong Salad varies from other traditional biltong salads in the fact that it adds papaya which brings its distinctive lightness and vivacity to the palate.  Biltong is laid out on a salad platter alongside bean sprouts, rocket, cube avocado and feta and topped with a herby white balsamic vinaigrette.

Whether you decide to go haute cuisine with contrasting fruits or keep it close to home and simple with blue cheese and avo, the biltong salad is certainly and exciting lunch or dinner option that you have to try for yourself.

Heritage Day (Afrikaans: Erfenisdag) is a South African public holiday celebrated on 24 September. On this day, South Africans across the spectrum are encouraged to celebrate their culture and the diversity of their beliefs and traditions, in the wider context of a nation that belongs to all its people.

In 2005, a media campaign sought to “re-brand” the holiday as National Braai Day, in recognition of the South African culinary tradition of holding informal backyard barbecues, or braais. 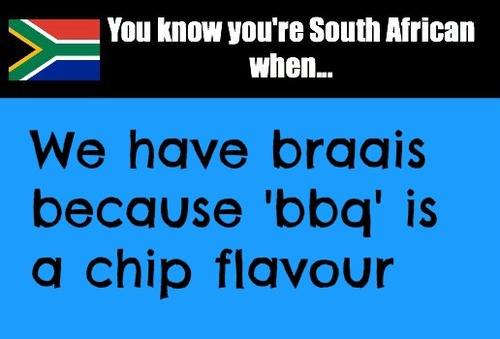 We also had a braai. I made a butternut dish my mom used to make years ago. With that we had lamb chops and boerewors. (Boerewors is a type of sausage, popular in South African cuisine. The name comes from the Afrikaans words boer (“farmer”) and wors(“sausage”), and is pronounced [ˈbuːrəvors], with a trilled /r/.Boerewors must contain at least 90 percent meat – always containing beef, as well as lamb or pork or a mixture of lamb and pork, the other 10% is made up of spices and other ingredients. Not more than 30% of the meat content may be fat. Boerewors may not contain any “mechanically recovered” meat, this is meat derived through a process where meat and bone are mechanically separated. 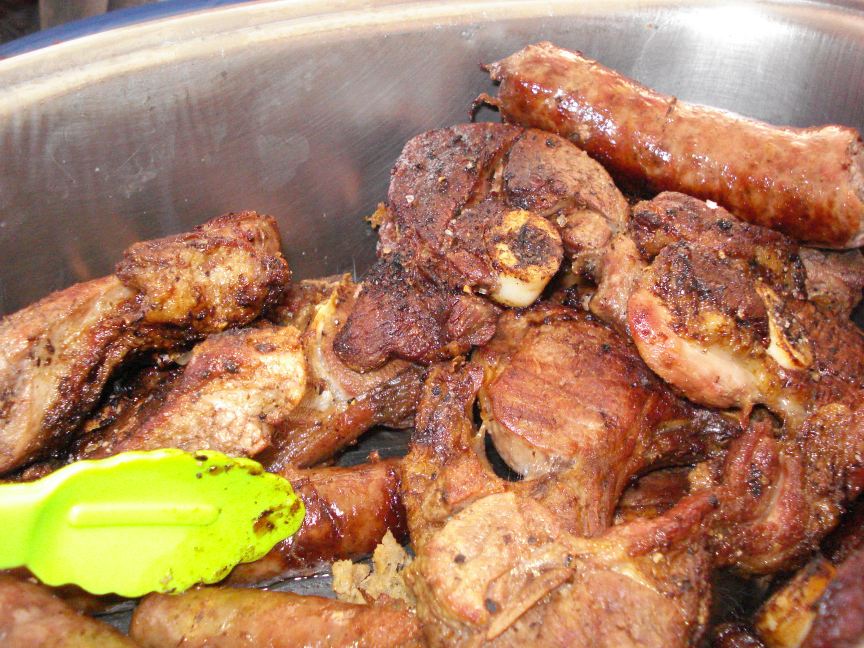 My sister made a beautiful spinach salad to compliment this meal. http://flippenblog.wordpress.com/ 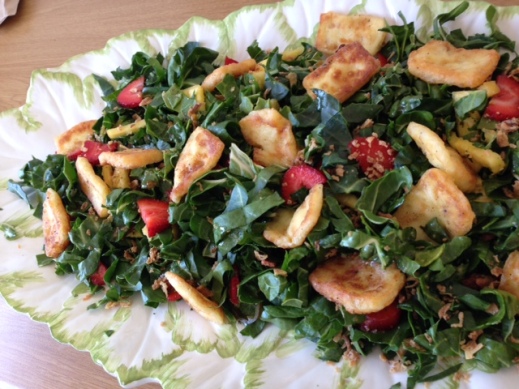 Place butternut squash halves on a large baking sheet flesh side up. Place 1 teaspoon butter in the middle of each squash. Season with salt. Roast 25 minutes, until flesh is fork-tender.

Half a punnet (or more) mushrooms, chopped 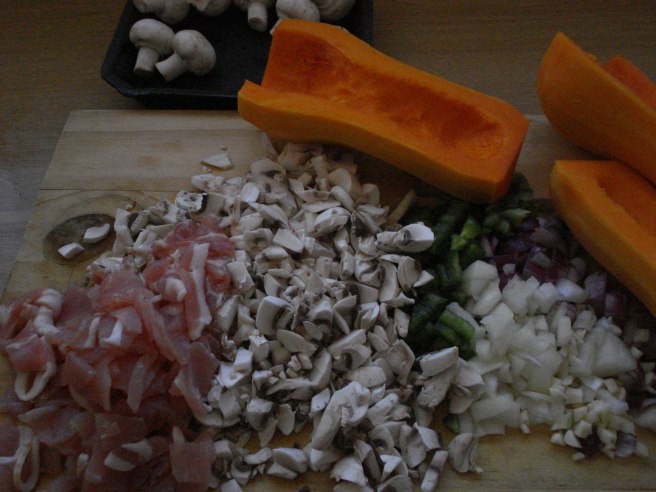 Fry onion, green pepper and garlic in some butter.

Add the mushrooms and  bacon to the onion and fry until cooked.

Add the cream and let it it reduce for a while.
Cut the butternut halves lengthwise , spoon mixture onto the butternut, grate some cheddar cheese over it. Sprinkle with chopped parsley and bake for about 10 minutes. 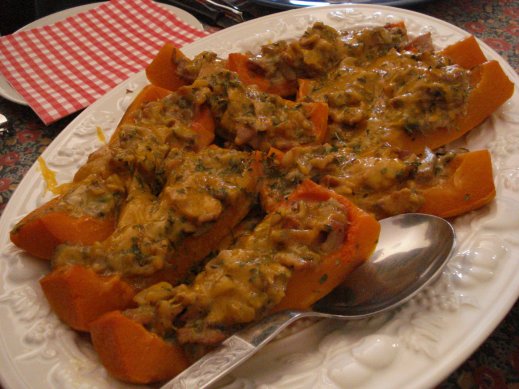 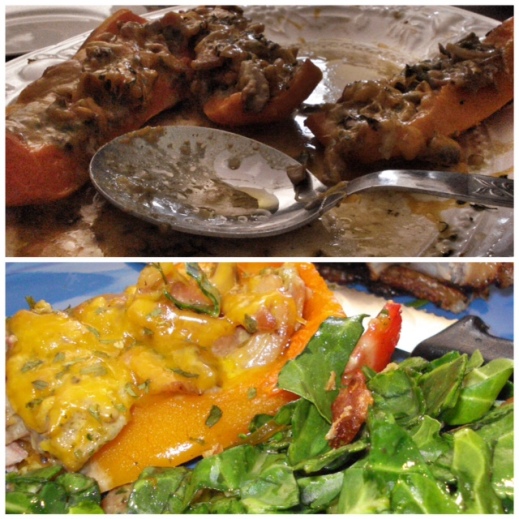